Sinulog this Sunday at St. Augustine's 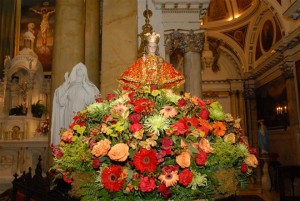 After church on Sunday, you might wander up 4th Street to take in the Sinulog at Old St. Augustine’s Church.

Did you know that Old St. Augustine’s Church– just north of the Ben Franklin Bridge on 4th, a block north of Old First — is an important center for the Roman Catholic, Philippino community in the U.S.? It’s the National Shrine for devotion to Santo Nino (the holy Child Jesus) in North America.

Devotion to Santo Nino was introduced to the Philippines by Augustinian missionaries in 1535 and it has become one of the most popular devotions for Catholics in the Philippines. The Basilica in Cebu is the international of this devotional practice. 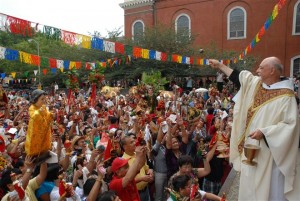 In July 1994, an official replica of the original statue of Santo Nino was commissioned by the Augustinians in the Philippines to be permanently enshrined at Old St. Augustine’s church.

In the Philippines and at Old St. Augustine’s church, an annual feast honoring Santo Nino called “Sinulog”, is celebrated on the third Sunday in January.

Because of the cold weather in January in this part of the United States, the Filipino Catholic community of the Delaware Valley decided to celebrate another feast of Santo Nino with a “Summer Sinulog” on the third Sunday in August, close to the feast of St. Augustine, which occurs on August 28th.

The Mass will be said at 11 a.m., but afterwards, about 12 noon, people and the statue of the Nino Santo pour out of the church to process around the neighborhood. Check it out: there will be music, dancing, traditional costumes and shouts of “Viva Pit Senyor Santo Nino”.