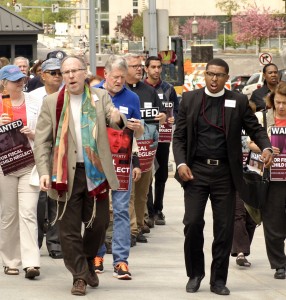 Have you noticed that the schools funding crisis is getting less and less press? …As if it’s become our new normal.

POWER is organizing to bring attention back to the gross underfunding of schools across this state. It began with POWER leaders, Mike W. and Michael C. included, showing up at legislators offices to serve them with warrants for “fiscal neglect of our children.” There were signs on doors all around the capitol. That got some notice.

To keep up the pressure, we are now doing Tabernacle Tuesdays — gathering on the steps of the Capitol in Harrisburg on Tuesdays from May 3rd to June 28th — for bold, prophetic action to call on the general assembly to pass a budget that provides $400 million in new education funding, the use of the BEFC funding for all basic education dollars, and an on-time budget.

Join us as we call on House and Senate leaders to make a moral commitment to support Pennsylvania’s children. The Pennsylvania legislature has neglected our children as they continue to ignore the damaging effects of underfunding their education. The withholding of funding from schools across the Commonwealth has robbed children of vital resources and programs. The condition of our schools not only endangers the physical well-being of Pennsylvania students, some of whom go without nurses and running water, but also affects their psyche and the understanding of their inherent worth as children of God.

May 17 People’s Court — holding our elected officials accountable as we hear evidence to support our charge of fiscal child neglect, child endangerment and malfeasance to taxpayers.

May 24 Probation Period — visiting the office during this period of probation to make sure our legislators are watching.

May 31 Silent Witness — gathering to hold a silent witnss to honor the lives lost to systemic underfunding of public schools across PA.

June 7 Wailing Prayer — gathering to lift up our voices in prayer as we continue to bear witness to our elected officials’ actions in Harrisburg.

June 14 People’s Assembly — gathering with folks from across the state to begin setting an agenda that reflect the needs of ALL Pennsylvanians.

June 21 People’s Agenda — continuing to build a people’s agenda based on the needs of the commonwealth, its families and children to show the legislators that the people of Pennsylvania demand fully, funded schools.

June 28 Children’s Advocacy Day — bringing families and faithful Pennsylvanians together for a rally to lift up the people’s agenda and call our elected officials to uphold their constitutional duty to support public education for all students.

There are three Tuesdays that Michael is trying to get some of us organized to go: May 31, June 14 and June 28. If you can go next Tuesday, or on June 14, or if a whole bunch of us can go on June 28 — with our kids too — let Michael know.

We invite you to gather any of the Tuesdays with other folks from the congregations and communities of POWER, on the Capitol steps as we, the faithful, travel to Harrisburg and confront those who have endangered our children for far too long. Click here if you plan to join us this week or in future weeks.