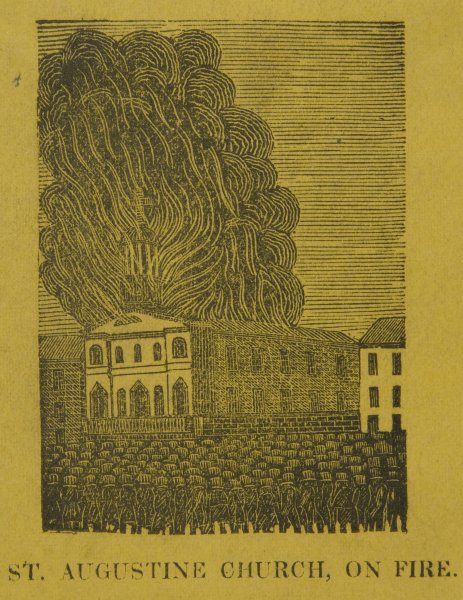 By the 1840’s, thousands of Irish Catholic immigrants had settled in Kensington.  The economic depression of the 1830’s to early 1840’s and the rise of industrialization combined with the mass immigration of thousands of Irish Catholics caused “native” American-born Protestants to fear the loss of their jobs and homes to cheap, unskilled immigrants.  Protestants accused the Catholic Irish of being clannish, not assimilating, and owing allegiance to the Pope.  Protestant legislators mandated the compulsory use of the King James Bible as a textbook in the public schools.  When the Catholic bishop asked permission for Catholic students to use the Douay Bible instead, he was refused.  Out of this turmoil, the Native American Party exploded on the scene to oppose the immigrants.

Old First’s pastor during this time was Dr. Joseph F. Berg.  As Philadelphia’s most prominent anti-Catholic, Berg helped draft the constitution of the American Protestant Association and edited 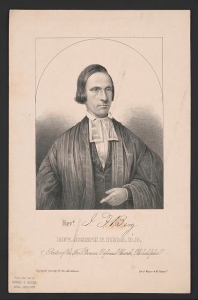 and wrote articles for The Protestant Banner, an anti-Catholic newspaper.

Berg’s writings and sermons could only have served to incite the church-burning mob of May 1844 and it’s likely that members of this congregation were part of that mob.

The Bible Riots contributed significantly to the rise of Philadelphia’s robust Catholic parochial school system and caused one-time areas of Philadelphia County such as Kensington and Northern Liberties to become part of the city of Philadelphia for purposes of fire and police protection.