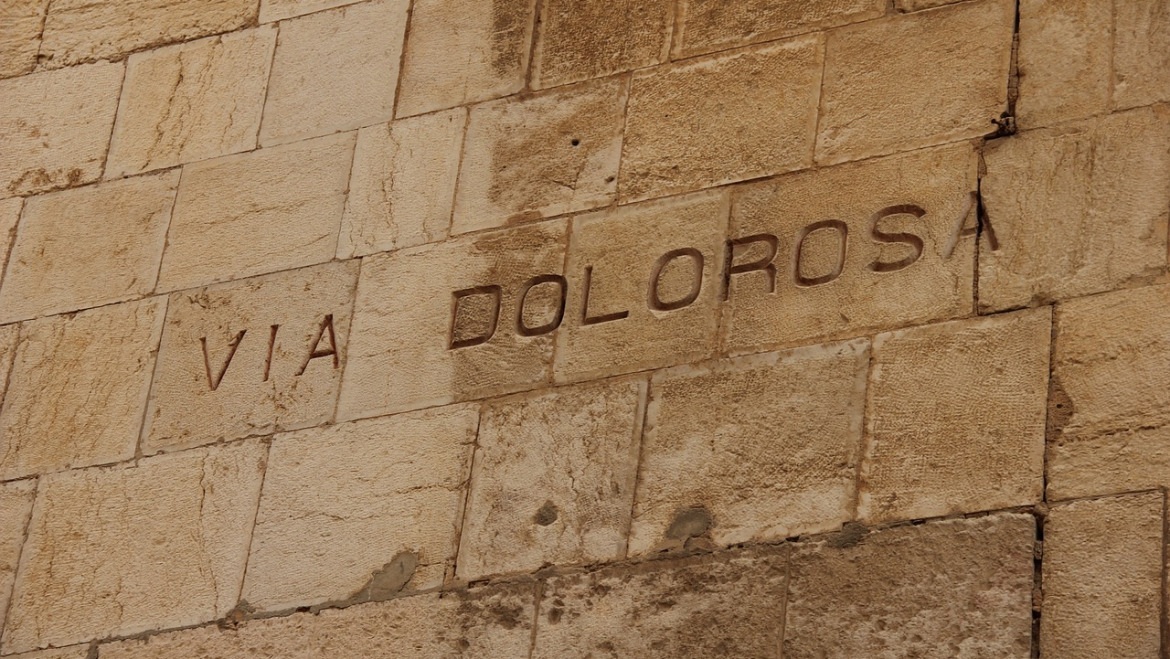 10. Jesus Is Stripped of His Garments : After the suffering of this walk through the streets of Jerusalem, at Golgotha, Jesus is stripped of his clothes. And then lots are drawn to see who gets them. The only property and privacy he had left.

HOW DOES THIS MAKE YOU FEEL? CAN YOU THINK OF SOMETHING, SOMEONE OR SOME EXPERIENCE THAT LEFT YOU WITH A BAD TASTE IN YOUR MOUTH? JESUS WAS DYING AND THEY HIM ONLY GALL AND VINEGAR…

11. Jesus Is Nailed to the Cross: Jesus is not the only person executed on Good Friday. The biblical story has crosses and condemned men on his left and on his right. The Bible also records some interaction between Jesus and the two others.

IF THERE WERE ANY BACK AND FORTH WITH THE CROWD, WHAT DO YOU IMAGINE WOULD BE SAID TO JESUS, AND HOW MIGHT HE RESPOND?

7. Jesus Falls a Second time : legend has it that on the walk from his condemnation to his death on a cross, Jesus fell three times. Interestingly, the artwork that illustrates the devotional we are using, shows the severity of his falls progressing: the first looked like he stumbled; this second looked like he fell to the ground; and the third that we will soon get to shows him stretched out on the ground, having fallen fully on his face.

IMAGINE YOU ARE STANDING IN THE CROWD RIGHT AT THE POINT WHERE HE FALLS. HOW’S IT MAKE YOU FEEL? WHAT IS YOUR INWARD RESPONSE? DO YOU MAKE AN OUTWARD RESPONSE? SOME MIGHT AVERT THEIR EYES – OUT OF RESPECT, DENIAL, OR SORROW – NOT TO WITNESS HIS SUFFERING. CONSIDER OTHER SITUATIONS IN WHICH YOU HAVE FELT AN INWARD PULL TO TURN AWAY FROM SUFFERING.

8. Jesus Warns the Women of Jerusalem : this is from the Bible, one of Jesus’ 7 last words: “Daughters of Jerusalem, do not weep for me; weep for yourselves and your children.”

IMAGINE HOW THE CROWD MIGHT BE RESPONDING DIFFERENTLY – THE MEN WHO IN THAT SOCIETY WERE THE DECISION-MAKERS COULD BE THE ONES WHO ARE JEERING AT JESUS. THE WOMEN, WHO ARE THEMSELVES POWERLESS IN THAT SOCIETY, MIGHT HAVE BEEN MORE PRONE TO EMPATHIZE WITH JESUS’ SUFFERING. ARE THERE PLACES IN YOUR LIFE WHERE VULNERABILITY MAKES YOU MORE OPEN TO GOD?

9. Jesus Falls a Third Time : As described before, the image associated with our devotional depicts Jesus having collapsed to the ground where he is lying helpless.