On April 21st Michael Caine and Mike Wass joined a group of 50 POWER folks to travel to Harrisburg to further the push for educational funding based on a full fair funding formula. Even though there was additional educational funding added to the 2015-2016 budget that recently became law, we are rallying to have the 2016-2017 budget (due to be passed by June 30th) restore educational funding to pre-Corbett days.

We were a noisy group that got the attention of people who even asked what we were chanting about – really more interest shown in Harrisburg than we’re accustomed to. We marched around the outside of the Capitol and then entered the Capitol, all the while chanting and singing loudly that the legislators were neglecting their responsibility for education in Pennsylvania.

Once in the Capitol, we visited a number of key legislator’s offices. When we went to the Speaker of the House’s office (Turzai), and as with all the calls we made, we served a warrant to each legislator for not performing their duties as it relates to education and hung posters outside their offices with the legislator’s picture on Wanted Posters.   Each Wanted Poster proclaimed, “Wanted for Fiscal Child Abuse for Failing to Fund Schools” and had the legislator’s picture. There were some surprised faces when they heard our words and saw the posters! See pictures below.

As a follow-up and desire to continually voice our concern at POWER, we are establishing what is called Tabernacle Tuesdays. As a POWER group, we will visit Harrisburg legislators each Tuesday until the budget is passed on June 30th. The first Tabernacle Tuesday will be May 3rd (Tuesday). Sign up HERE to participate in one of the Tabernacle Tuesdays. 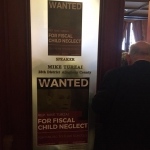 One may ask, “Did the direct action do any good?”  If this implies the notion that a legislator changed his/her mind, the answer is not yet. But, we got people’s attention with this action, which I think will provide a catalyst for future change. Change in Harrisburg tends to be a slow process at best, but POWER is optimistic that change can occur and educational funding will become a reality.