We Have Something to Say to the World 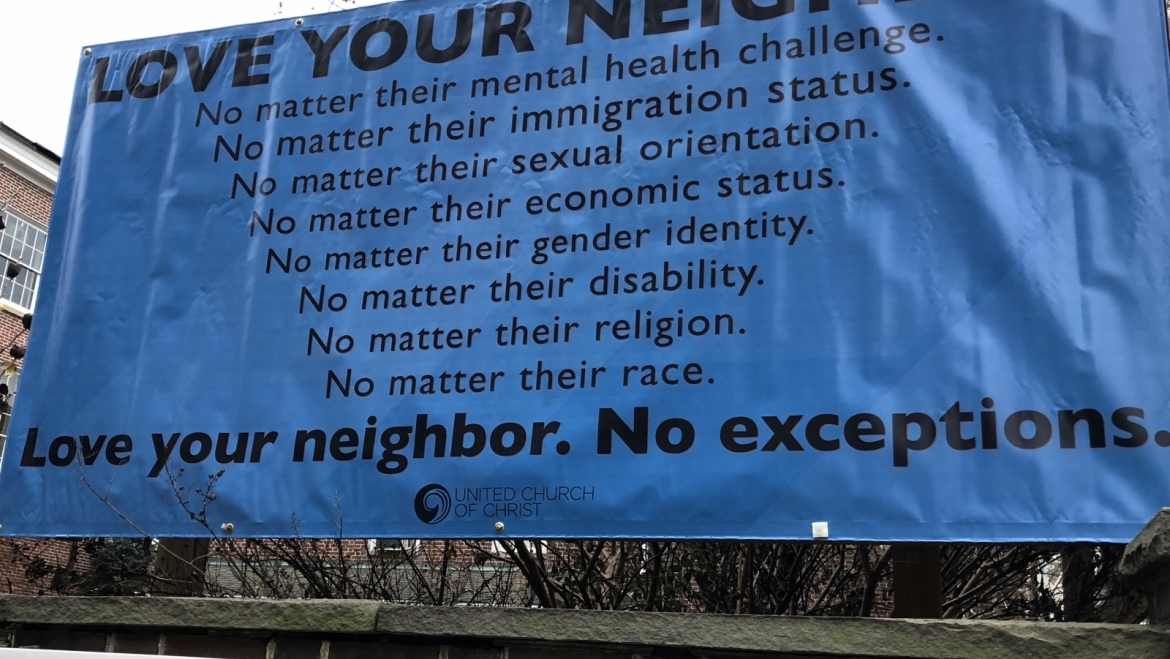 I posted this incident on the church’s Facebook, but it probably deserves more consideration:

“Last week, as Michael was out in the cold hanging the Christmas messages, a passerby, noticing what the pastor was doing, commented, “It’s nice to see a congregation with a message for the world; it seems like so many churches these days only have closed conversations with themselves.“

Michael told him about our Refugee Nativity and how we hope the teachings of faith aren’t just internal and spiritual, but also are public and make a practical difference. As Cornel West has said, “Justice is what love looks like in public.”

The passerby wasn’t wrong however. A lot of church life these days is turned inward — in what often feels like some sort of circle-the-wagons defensiveness. In some places that’s because the Christians’ understanding of salvation is narrowly personal, exclusively between the believer and God —  without any communal or political implications that would drive it from the silent prayers of the believer.

But more widely, it’s probably about the secular age we live in: as church has a smaller “market share” in contemporary American life, there’s less and less chance that the person one might be talking with has the experience or interest to engage around religious themes.

It may also be indirectly about the freedom of religion and the division of church and state in the U.S. We live in a culture of many, different faiths / various stances of conscience. Without religious uniformity or agreement, from sometime back, the topic of religion has joined sex and  politics as being considered taboo in public. It’s assumed such conversations are uncomfortable at best and more likely to lead to conflict. Therefore, they are best avoided.

Without a reliable, wider audience, God conversations have ended up limited to the self-selected members of one’s own faith community. Sometimes, even within a congregation, it’s hard to get people to share about their faith and religious experience.

In November, when the Rev. Cean James came to introduce us to Natural Church Development, he mentioned, among other things, that UCC churches are not very strong, effective, or fluent in evangelism. Of course, he is right. Evangelism is not where our theological commitments lead us. Instead of offering people a definitive life or death choice between eternal condemnation or eternity with God in Christ, we tend toward applied pragmatic faith, focusing on how faith is helpful in THIS life… I sometimes explain that we leave up to God what is God’s and instead try to focus on what we are to do in this world.

What is it we offer people? That’s an important question, one we probably don’t have an articulate answer to, at least right on the tip of our tongues. I think we offer a lot. We just aren’t so good about naming it, so that others can understand! And without a clear formulation, it can be sort of hard for us to know what to say and for others to engage with us in any deep way.

When the Community Life Standing Leadership Group was evaluating Rev. James presentation, one of the members shared a worry, that he had “given up on us because evangelism was neither our strong suit nor going to be easy for us to master.” The rest of us hadn’t heard that at all. Rather we heard him helping us by naming a fact that was true for us and many other congregations in our tradition– naming it in order to help us figure out how to improve.

So, I begin here by affirming that we have something to say to the world. That’s what the signs on the fence are about. (When I took the photo used in this article, there was a neighbor moving slowly from sign to sign, taking her time, reading, and snapping pictures of the ones she found helpful).

One of the reasons we got involved with POWER was to find an advocate’s voice: we can care for the urban poor, but we also want to be able to call and act for change, such that people won’t need charity anymore.

In fact, Old First has had a recent track record of some experience and passion trying to show the world that church isn’t necessarily the bad things thought about it or expected from it. We want to talk about the commitments that we hold coming from our understanding of God through Jesus. Not because we need everyone else to be or believe like us. But because we believe that the church could be a spiritual home for more people if they only understood what it’s about. And because we know that the church’s influence in our world depends on its reputation and authority.

But we also have something to say because we are willing to, want to work with others — yes, those who are different from us — to make the kind of world God means for us all. As Jesus said, “Those who are not against you, are for you.” We often find that we can work closely with others who may not share the same traditions but end up in similar places. And we are stronger together, in part because of the grouping of our various faiths, voices, and communities.

Finally, we want to tell others about the values that our faith calls us to: compassion, respect, justice, freedom, equality, love… We know others get to similar commitments along different conceptual or heartfelt paths, but we think these values are important for us all. We don’t preach that Jesus is the only way to a good life, but we are much more comfortable suggesting that love and justice, compassion and mercy are what make us truly human.

Ours is sort of a Good Neighbor Christian Faith. The new, blue banner at the corner of 4th and Race (facing Ract St.) says:

No matter their mental health challenge.

No matter their immigration status.

No matter their sexual orientation.

No matter their economic status.

No matter their gender identity.

No matter their disability.

No matter their religion.

No matter their race.

LOVE YOUR NEIGHBOR. NO EXCEPTIONS. 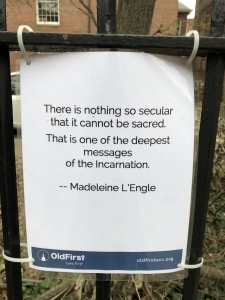 See you in church for the Christmas Pageant (and congregational meeting) this Sunday,