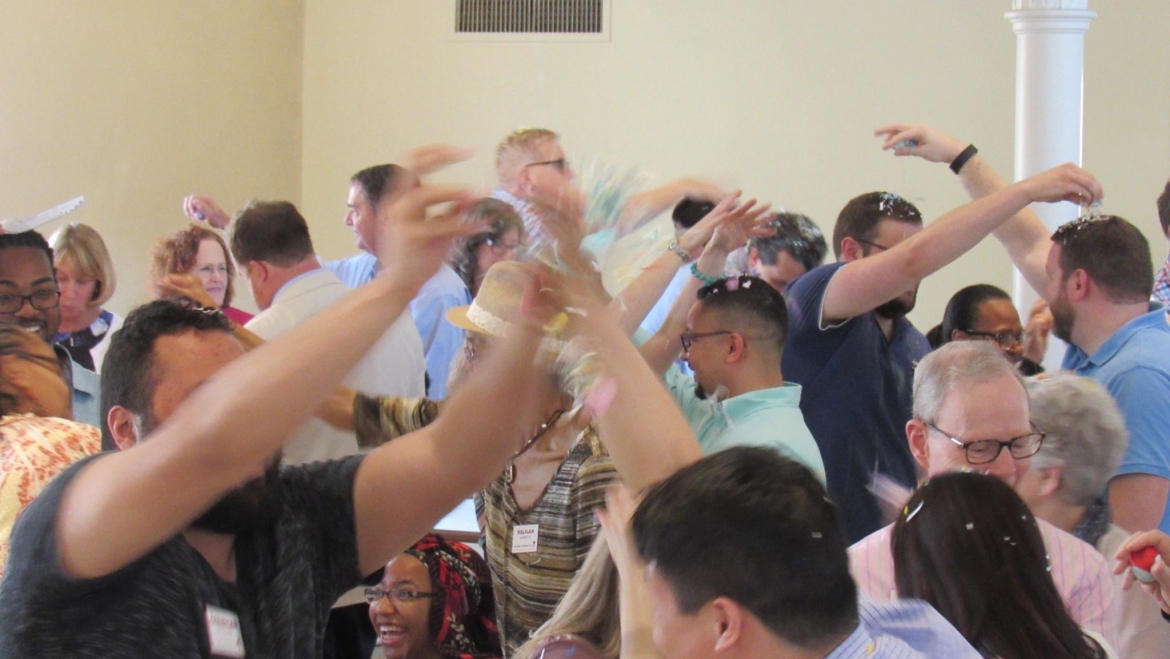 Beth W. and I were standing with the gluten free bread and its companion cup. Never the most popular communion station, but we did have one visitor who came up to us and thanked us as a church for making sure that she could receive communion.

But otherwise, a few of our regulars wandered over to us, perhaps because we were left looking lonely and forlorn! But mostly, Beth and I were left to ourselves, talking quietly and watching people take Easter communion.

Or not take communion as it were. What we saw was that with the crowd the size we had on Easter, our way of lining up to receive communion doesn’t really work so well. It was some sort of pedestrian gridlock. More people had poured out into the aisles than they could accommodate. And people waiting for communion couldn’t move up towards the bread and the cup. And people who had already received couldn’t move back to their seats.

There was a analogous “problem” with the prayers that we shared right before communion. Someone complained to me after worship that there were too many prayers! I just laughed, “How can there really be too many prayers in church?” Actually, I had been proud that so many had felt free to raise a prayer from where they were sitting in the pews. I thought to myself, “Wow, the visitors in church today — and there are a lot of them — they must be impressed that this is a congregation that prays, honestly, freely, out loud.”

When Griffin and Elizabeth inched past Beth and me, he smiled and said, “It’s the kind of problem we want to have.” Amen. Would that a consistent, even constant challenge for us was to figure out how to do things with too many people involved!

Truth be told, I’ve never seen this church so crowded when we have tried to do communion with people coming forward to dip the bread in the common cup. But I am glad to have seen it, even if only to know that we have to use the little individual cups and serve it in the pew when we can foresee that there will be a crowd.

The folks who have to prepare communion aren’t so thrilled with doing the individual cups because it takes so much longer to get communion ready, and afterwards there is so much dish washing to do.

And I don’t really like the individuality of each having her or his own cup and getting served where one is in the pew. I mean it seems to send the wrong message theologically. I figure the bread is unavoidably broken in pieces for each person. Why can’t the cup remain common? Then we get some sort of balance about how being part of the body is about one’s direct, “vertical” relationship with God and one’s ‘horizontal’ relationships with everyone else.

But when we expect a crowd, we’ll serve individually and in the pews. Let’s not worry much more about that.

Instead, I’d like to invite us to think about what we can do to get a crowd like that more often. If we believe that coming to worship and participating in the life of the faith community makes a difference, don’t we want to get more people involved?

When I first started at Old First, while we were doing the Covenant Ministry, we invited all our groups and each of us individually to think about how we could develop our traditions, programs and interactions so that they touched and talked to more people. Maybe it’s time we raise those kinds of questions again, and get more intentional about how we reach out to, welcome and engage more and different kinds of people?

Why? Because we have something good to share. And I want most of our problems to be about having to do things when there are too many people!
See you in church,