What difference does the past make anyway? Adult Forum, 9/23, 10 am 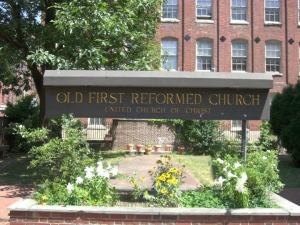 Early in the 1900s the innovative industrialist Henry Ford famously said, “History is more or less bunk. It’s tradition. We don’t want tradition. We want to live in the present, and the only history that is worth a tinker’s damn is the history that we make today.”

While most folks at Old First would not be as outspoken as Ford in saying that it’s the present and not the past that matters, for many of us the congregation’s past might be quaint and occasionally mildly interesting, but most of it doesn’t seem important any more.

What more appropriate time than the anniversary Sunday on which we celebrate 285 years of Old First history to see if there are at least some parts of our past that aren’t just bunk–things we can’t escape from and would be wise to try to understand rather than ignore.

At 10 am on Anniversary Sunday, September 23, Bob Schneider will help us think about how Old First’s present and future are shaped–limited, broadened, hampered, empowered–by its past.

Why do we worship the way we do and why do some people get upset when we talk about changing it? How did we end up with a big old building with a big sanctuary upstairs and limited space for other activities? Why is the building where it is? Why aren’t there pictures, statues, stained glass windows, or projection screens in the sanctuary? Where did the strange name come from? Were we ever “Young First?” First at what? Is any church “unreformed?” What is the Untied–I mean United–Church of Christ? Was it around in 1727? Why doesn’t the pastor just tell us what to believe and what the right thing is to do? Why isn’t he a priest? Why do we have a pastor anyway–aren’t we all equal before God? If the people can do the prayers why can’t they take turns preaching, too?

We won’t talk about all these questions on the 23rd but those are the kinds of things we’ll consider as we celebrate Anniversary Sunday in Adult Forum. Let’s call it a bit of “de-bunking” of Old First’s history.