“What happened to the courtyard?” AND “We’re going to see building plans!” 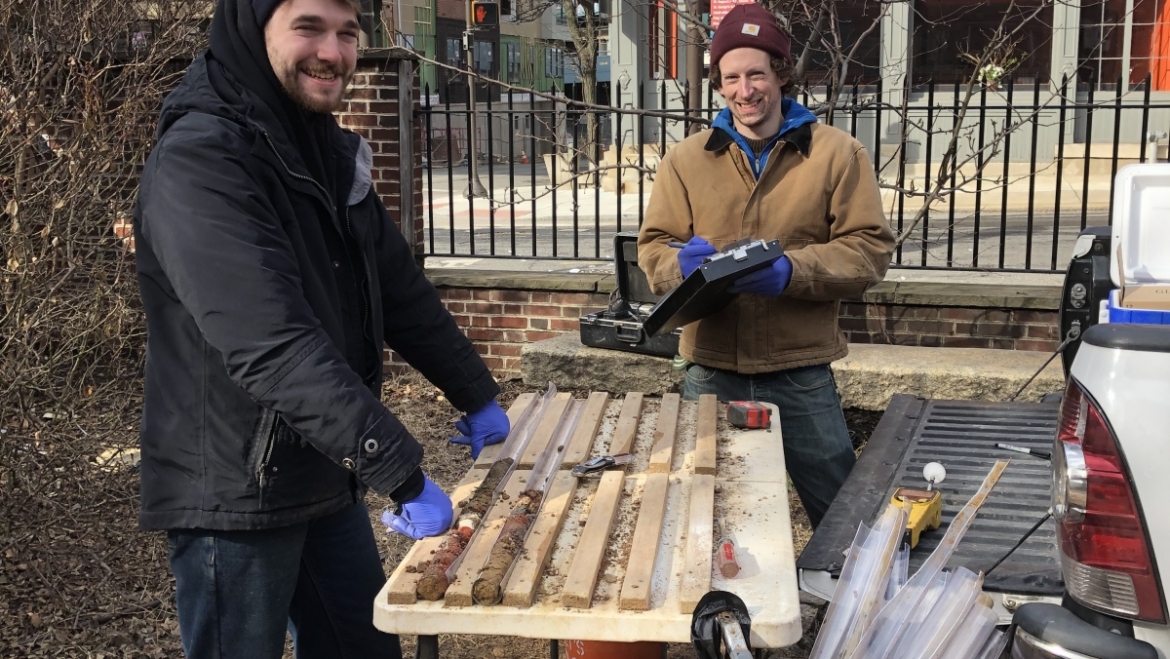 First it was green, yellow and red lines painted all over the ground, sidewalks and parking lots. That was for the underground radar scanning of the property. Nancy hoped it might show whether or not the crypts extend out from the building under the yard towards Race Street. She thinks they might. Unfortunately, the radar only penetrates about 6 feet down, as it’s primarily looking for buried oil tanks.

This week, it was drilling all over the property seeking soil and groundwater samples. You won’t miss the tire tracks in the front courtyard, on the bricks, the ramp and the welcome mat as you come into church on Sunday. The drilling equipment was on the back of a truck the day after the ground was saturated by snow.

The point of all this is to be able to give our whole property a clean bill of environmental health. The parcel project doesn’t subdivide our property, so all of the building requirements — from environmental safety to storm water runoff — apply to our whole property. Since the sanctuary building was used as a paint warehouse for almost 80 years, and other industrial businesses were in buildings lining both 4th Street and across the front along Race Street, there was some concern about contamination. So far, everything looks clean, even if the process of determining that left property temporarily worse for the wear. 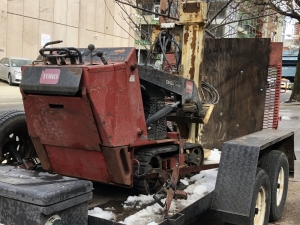 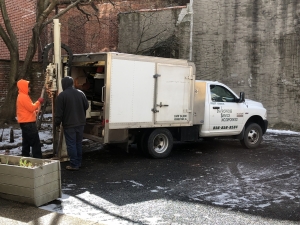 In other news, most of the neighborhood religious congregations are supporting us already. We are waiting on two more.

And the Old City District as well as the leaders from the former Old City Civic Association have expressed support and even offered their help. We still have local meetings to schedule, but our reception for the project so far could not be better.

This coming week also, Tuesday, there is the initial meeting with the Designation Committee of Historic Preservation. We are petitioning to declassify the CE Building, as it is mistakenly listed as a contributing building to the historic district. (Only buildings built before 1929 can be considered “contributing,” and Old First constructed the CE building in 1974). Once declassified, the CE Building can be demolished by right. It is assumed that our application is routine; however, this action definitely flags publicly that Old First has plans for the property.

To that end, the JVMT is meeting twice this week. The second time, they will be with leaders from Community Ventures, DePaul USA, BWA Architecture+Planning and the team they have assembled for a design charrette. Upcoming deadlines with Historical Preservation, the Zoning Board, and initial funding applications demand some decisions on the plans for the building we’d like to build.

That brings Old First to one of the tight turnaround time decisions we will face. The JVMT is tentatively asking the Elders for meetings on two consecutive Sundays, March 24 and 31, after worship. At the first, there would be a basic presentation of the building design — the building footprint and massing. We will not have complete plans with final appearances yet, but need to weigh in on the general direction of architectural planning — size, shape, height, broad configuration of spaces in the building. There will be time for questions at the first meeting. The second week we will have a congregational discussion and vote. Please pencil this in your calendars and listen for further word from the Elders.