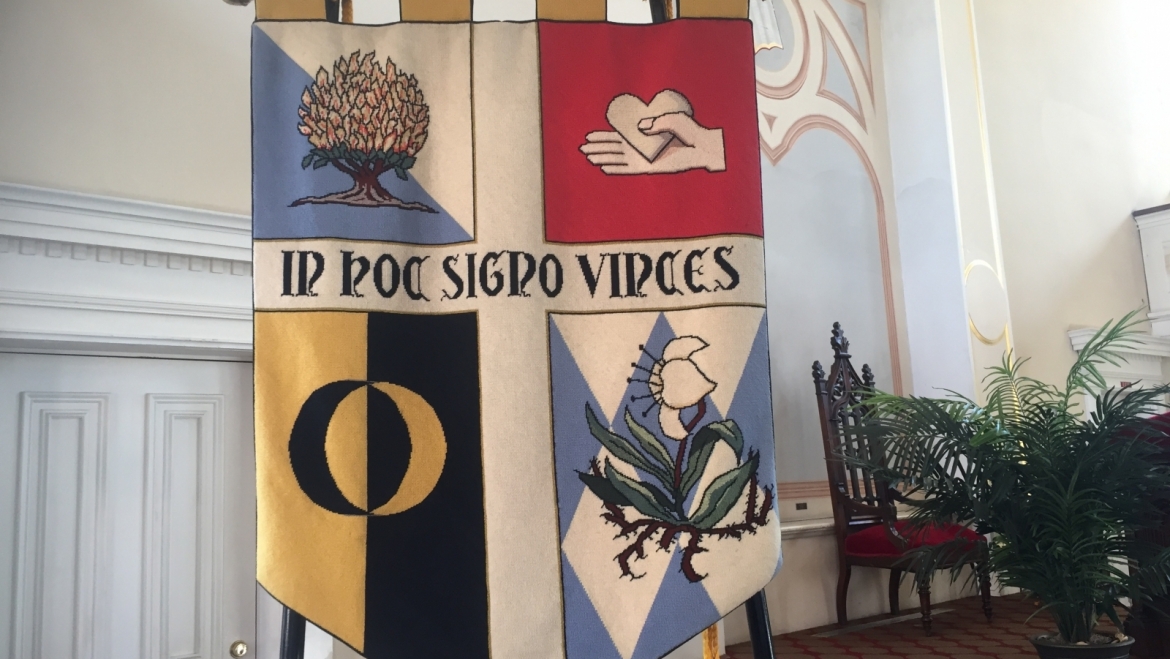 Nancy D,  in “The Time with the Children’ on Anniversary Sunday, did a great job of introducing the kids, and  reminding (or teaching?) the rest of us, the meanings of the symbols of the escutcheon of the Reform Church in America. It’s in our sanctuary because the denomination was founded here at Old First in 1747, and is one of the predecessor denominations to today’s United Church of Christ.

Our escutcheon was needlepointed, designed and produced by Frances Atz in 1977.  It is divided into four sections by a large cross on which is inscribed…IN HOC SIGNO VINCES (“in this sign you will conquer” from the dream Constantine had before a battle which became his motivation for converting to Christianity and bringing the Holy Roman Empire into the faith behind him).

Besides the image of the cross, there are four distinct symbols–

During Nancy’s presentation, it occurred to me for the first time that the escutcheon has no direct symbol of any German peoples.  What happened to the Germans???

Though the people who came to Old First were immigrants from the Palatine, a region of modern day Germany, and, in fact, most of the early Reformed Church folk who came to Pennsylvania and the Middle States in the 18th century were either from areas that became Germany with that country’s unification / founding or are German-speaking Swiss. Still, of the symbols represented on escutcheon, why are 3 of the 4 traced back to French or French-speaking church bodies?

I asked Nancy, and good archivist and historian that she is, and she pointed out, rightly, that there wasn’t really a Germany yet. Rather there was still the Holy Roman Empire and the emerging nation states, powerhouses like Prussia and Brandenberg, and a host of other states of various sizes and political power. Still one wonders if the Reformed Churches in Germany had any symbolry that connoted their existence and heritage.

Another answer is that in the midst of all the religious upheavals of the 30 Year Wars, theological affiliations — Reformed, Lutheran and Catholic — were  being forever shifted as rulers changed their confessions repeatedly for political advantage. Perhaps those theological affiliations in such a situation were more important in church than national identities or territories.  Names of churches reflected this reality, i.e. the Reformed Church in France and The Reformed Church in Switzerland. The point was how one understood God, not where or under what earthly power one lived.

Finally, I also wonder if perhaps in all of the shifting alliances, could the larger, unified Reformed church movements in Switzerland and in France actually have provided the judicatory administration for Reformed congregations in regions that later were to become Germany? This was certainly the case here in the colonies that were to become the United States. Before the German Reformed Church in America was formed here at Old First, the judicatory and mission functions for German-descent congregations was provided by the more developed Dutch Reformed Church in America (with its longer history and strength from New York and the Hudson Valley).

Do these symbols, their origins, and the communities they hearken back to matter?  Maybe not.

But it is interesting to think in these days — when religious symbols and meaning seem to be on the wane and nativism and nationalism on the rise in our culture — that there were times when people were unified or divided by the way they saw God or practiced their faith.  Language and region didn’t define them so much.

Ok, that’s true today, too. At least, there can be major divides between Muslims and Christians and Jews that are supra-national. But can we imagine that faith could actually unify people across national lines? Or asking in another way, in our days, how often is religious difference just a guise or excuse for national divisions?

Maybe simpler, just ask yourself, how central to me is my faith and understanding of God? And does it bring me closer to other people, those who are like me, than those who are not?  Or does my faith segregate me from others?

Actually, let me finish with a mash-up I can take from the legends of the symbols we have been left with: God is with us as God has always been, so we can turn our lives over to God, get through tough times, and though not be spared some suffering, not be defeated. I wish our faith were more real to our self-understanding and the roles we take in the world.