What is the Story Behind the Pewter Plate? 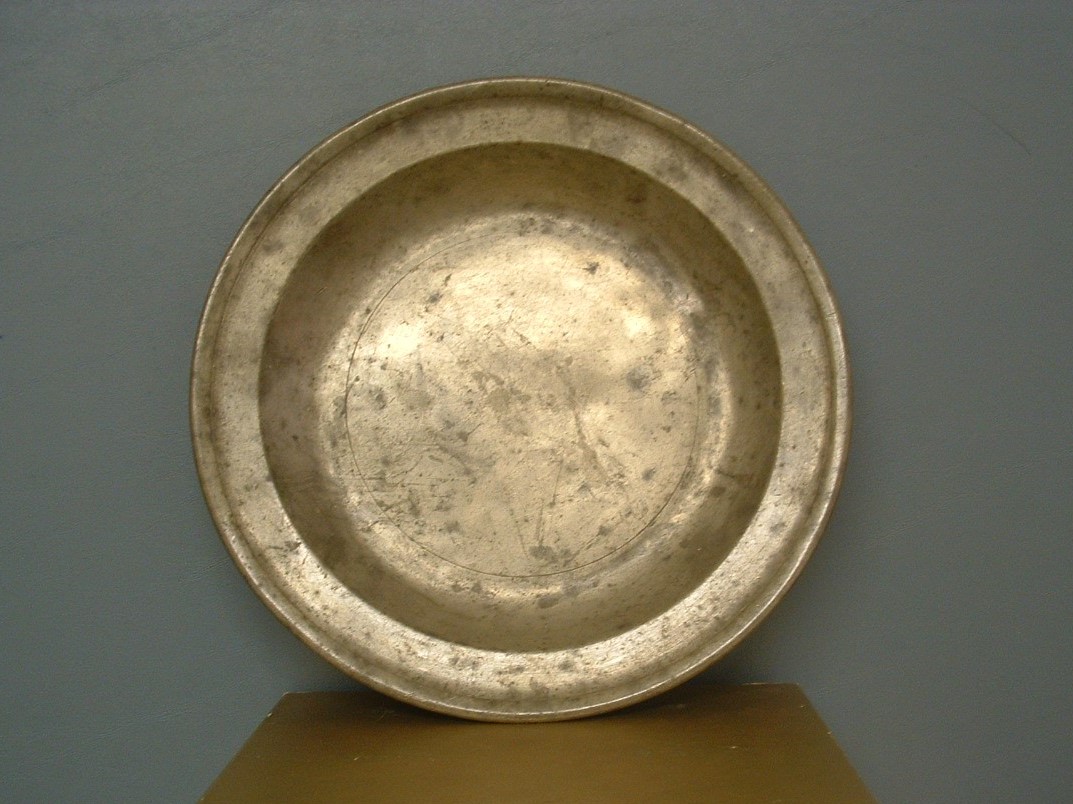 On the bottom of our plain, banged up pewter plate is a touch mark of an eagle within a circle, possibly with the word Federal.  This touch mark was one used after the Revolution by William Will, master pewter and member of Old First.  An article in The Mirror newsletter states that the plate was used for a collection plate at the door of the hexagonal church.  Maybe.   The article also erroneously states that the plate was purchased in 1750.  The plate could not have been bought in 1750 because William Will was eight at the time and still living in Germany.   A note on the box the plate has been stored in for years reads that the plate was used in the 1772 building.  Maybe.  The plate’s use in either or both church buildings is definitely possible.

The son of a pewterer, William Will was born in Germany in 1742.  At age ten he arrived in New York with his family.  He moved to Philadelphia in 1763 and married Barbara Colp in 1764, the year experts consider the beginning of his career as a pewterer.  Barbara Will died in 1767, possibly of causes related to childbirth, and William married Anna Clampfer in 1769.  Will was a leader at Old First.  In 1773 he and the pastor, Casper Weyber were two of the 16 members of the Corporation (the congregation’s governing body) to sign the German language copy of the city document verifying that the congregation had constructed a larger church building and was now entitled to increase the amount of money it raised from £300 to £500.  His civic involvement included serving Philadelphia as an overseer of the poor, a sheriff, and a representative to the General Assembly.  During the Revolution he served on the Commission for the Seizure of the Effects of Traitors.  In 1776, he formed a company of infantry and rose to the rank of Colonel in the Continental Army.  After the war, Will remained very involved in public life, all the while working as a very prolific and talented pewterer…Philadelphia’s pewterer.

p.s.  William’s brother, Philip, worked as a pewterer (3rd St. between Arch and Market) but was also a cabinetmaker and a dealer in wine, rum and molasses.  He and his wife also belonged to the church.  Philip drowned while bathing in the Delaware in July 1787.