What We Learned About Renovating the Reredos 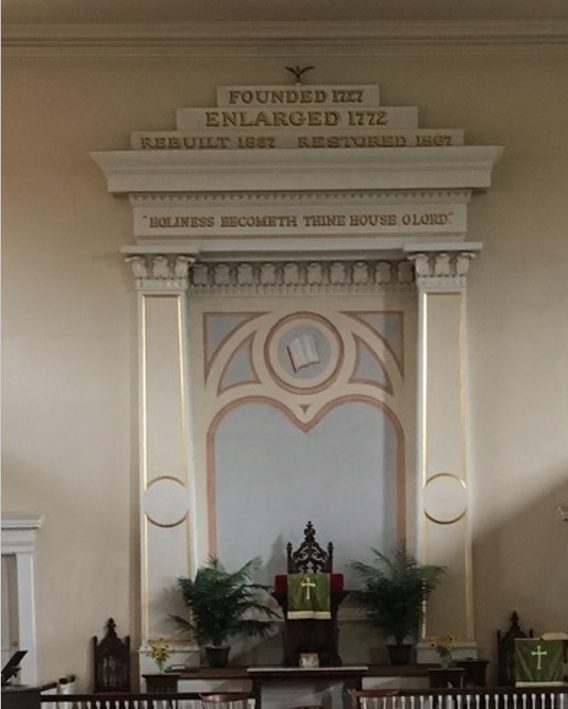 Last Sunday after worship, S.E.A.C hosted a conversation on the reredos at the front of the church. Not the whole reredos, but the square “within” — below the pediment at the top and between the two pillars. Currently, it is decorated with “the open bible” set in a depiction of a gothic window frame.

Michael opened up the conversation talking about the importance of physical space and imagery… despite the pandemic having taught us that we can create virtual sacred space.

He pointed out that our Sanctuary has few overt symbols; the volume and expanse of the space and the drama of the architectural features, the reredo and the sunburst, provide much of the feeling of majesty to the room.

(In a private message, someone asked if there was a specific image that “belonged” in the space we were considering. Michael responded, “Well, the whole reredos structure is essentially the entrance to a temple (Egyptian in its design elements), so what really belongs there are massive bronze or wooden doors! …But that doesn’t really answer our question. The reredos is an architectural device to focus our attention on the action that takes place at the head of the room on the chancel…we should “illustrate” it with whatever is most meaningful for our use of that space specifically and our ministry in general.”)

Bob R. then reprised the S.E.A.C. Committee’s suggestion, shared earlier in the E-pistle after Bob S.’s sermon about out not knowing why or how the Bible came to be part of that reredos decoration. Old First has often over the years explained our “open bible” as an affirmation of low-church theology and practice during the Mercersberg Controversy within the German Reformed denomination. But the “open Bible” was also the symbol of the anti-catholic, anti-Irish immigrant movement that produced the Sunday School Riots. Or as Bob S. said, “Maybe someone just had some leftover Bible wallpaper.” We have no historical evidence, and therefore no way to know.

S.E.A.C. is suggesting we bring the Bible down from being a symbol on the wall, and instead make it a real Bible displayed and used on our communion table, where the lector can read from it each week. The Bible is important to us; why not symbolize that by bringing it near, in reach, to be used in the life of the congregation?

Allison then took us through an overview of what we know about what’s there and what we don’t, showing us again earlier images of what we have now as a reproduction as well as another design that was there earlier looked like. She wanted to get us thinking and talking about possibilities if the congregation decides to change what is there. She led us to 6 poll questions we used to gather people’s opinions.

Below are the questions and following their poll results:

The SEAC folks were not completely surprised with these results. But there were not exactly sure what they meant either! Why did the majority, for example, vote for a new image on the last question when previously the majority tended towards conserving what is already there?

We know there needs to be more discussion, and in the comments, people are almost of one voice that they do not want to have to make a decision before we are back in the space.

But for the time being, S.E.A.C. did its best to interpret the info gathered. S..E.A.C. is moving forward believing: :

~ People are willing to consider the Bible on the Table instead of up on the wall.

~ But it seems that once the Bible is gone from the design on the wall, people cannot imagine that blank space in a solid color. Between the polling and comments added in the chat (many people wrote in the chat who may not have voted — and Michael can make the chat available to anyone who wishes to read it), the consensus was that the space needed some visual filler. You can see that in the strong showing for keeping the Gothic window frame (#2)  and for choosing another design for the space if what is there were to be removed (#6).

~ The Committee talked on Wednesday about coming up with some different design ideas / examples for filling the space so that people could begin to better understand / envision their options.

~ Janice and Allison are also going to try and figure out it the image of the open bible could be removed and preserved off the wall.

And that’s about it! We don’t need to rush. We can keep working on the alternative of the Bible on the Table instead of the wall. And going forward, we need to figure out what design would be best in the space, but not before we return to the Sanctuary. .

If you have any questions, concerns or ideas, you might speak with Allison, Bob R. or Janice, or anyone on the  S.E.A.C. Committee.