What’s the Story Behind the Columns in the Sanctuary? 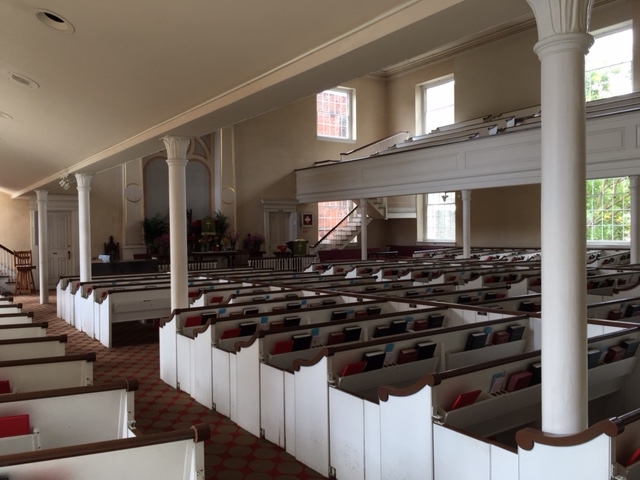 Of the balcony columns, only the three back ones on the east side of sanctuary are original to the building.  These three are cast iron.  The replicas are made of 6” hollow steel pipe.  If you rap the columns with your knuckles, you can hear the difference.  It was the varying height of the three columns that revealed the slope of the sanctuary floor to the restoration architects in the late 1960’s.  You can see the slope for yourself upstairs by letting your eye follow the brown molding under the side windows.  Downstairs you can see the slope by looking at the widening space over the windows in fellowship hall.  The papyrus leaves on the capitals of the columns continue the Egyptian Revival style of the reredos.

Over the years, stores and additional warehouse space, etc. had been erected in front of and to the sides of the former church building.  (See the photo in the lower narthex display.)  Our three columns were recovered when Owen Fox, president of the board of trustees and the major leader of the return to 4th & Race, saw a column fall off of a truck that was taking scrap metal from the buildings in front of the church, as it was being torn down.  Unfortunately those three columns were the last ones removed from the buildings.  The others had already made the trip to the scrap metal yard and they were gone forever.  What were the columns doing in those other buildings?  They were being used as lally poles—holding up the ceilings/floors.