What’s The Story Behind The Reredos and The Open Bible 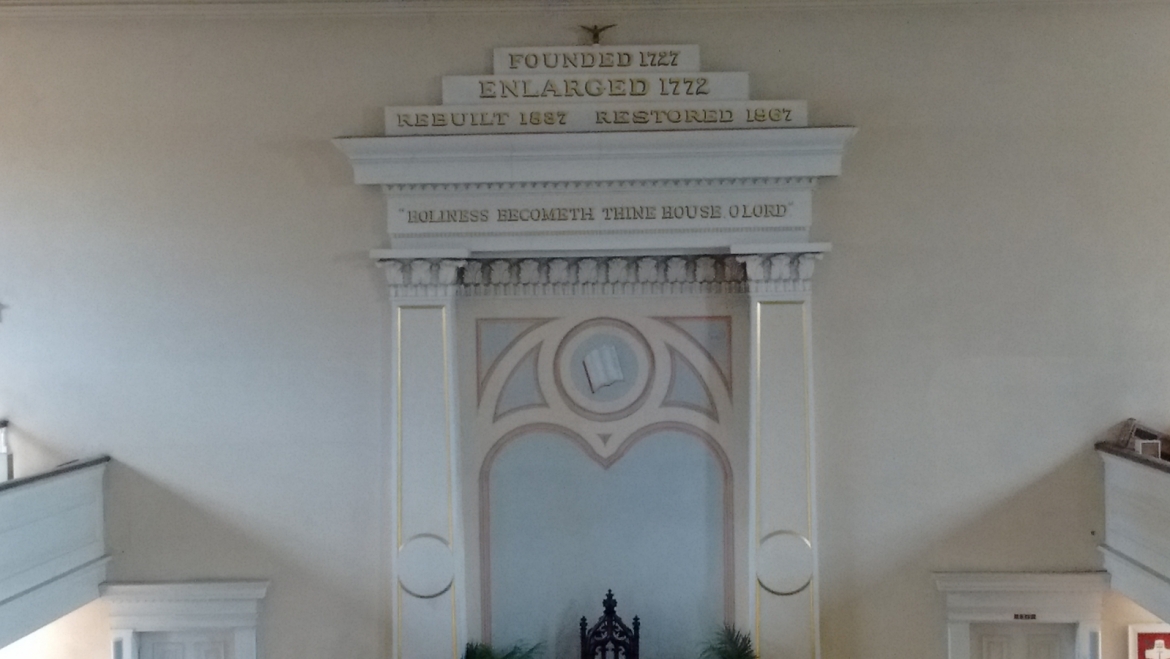 A reredos is the decorated part of the wall or screen behind the altar in a church. 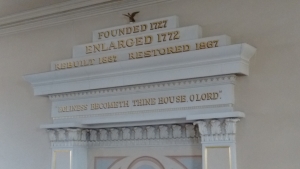 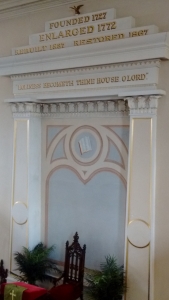 First’s reredos includes the pilasters, the entablature above the pilasters, and the open Bible.  Our reredos is unique because of its Egyptian Revival style.  The prominent Egyptian Revival elements in the reredos are the elongated trapezoidal shapes of the pilasters and the entablature above them.  The papyrus leaves in the capitals of the balcony columns extend the Egyptian Revival motif from the reredos out into the sanctuary.  Egyptian revival became popular in this country in the early 1830’s, thus the style of our reredos added an updated or modern touch to the sanctuary when the church was built in 1837.

Oral tradition says that during the restoration of the sanctuary reproducing the tablet area and open Bible in wallpaper as originally executed was too expensive and so the decision was made to have the tablets and Bible reproduced in paint instead.

I’ve tried, but have not found any reference in the minutes of the Corporation (the Corporation was the equivalent of our Admin SLG) with regard to when or why the Open Bible became a part of the reredos.  A good guess would be that it appeared after/during what is referred to as the Mercersburg Controversy.  During the time of the controversy, one faction of the Reformed Church (our then denomination) wanted to restore the importance of the Eucharist in worship.  Another faction wanted to the 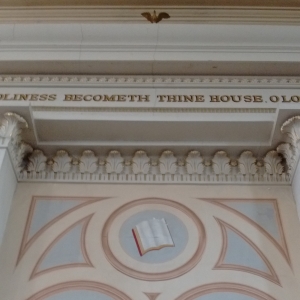 Eucharist less central fearing that emphasis on the Eucharist was too Catholic.  This latter group favored a plain, or “low church”, style of worship–one that put more emphasis on preaching the Word and less on ritual.  The open Bible in the reredos is a statement as to what side the pastor and congregation of Old First were on in the 1850’s-1870’s.  An upshot of the controversy was the founding of “low church friendly” Ursinus College in 1869 and our pastor, John H.A. Bomberger, left Old First in 1870 to become Ursinus’ first president.  Both the Mercersburg Controversy and the founding of Ursinus College occurred not far removed in time and memory from the anti-Catholic Bible Riots of 1844 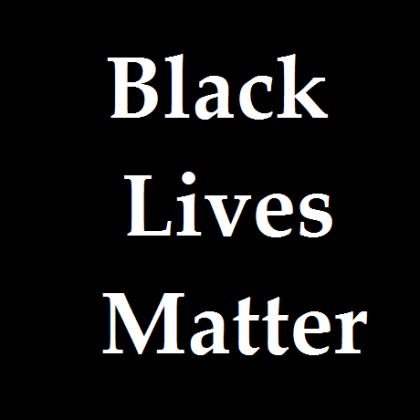