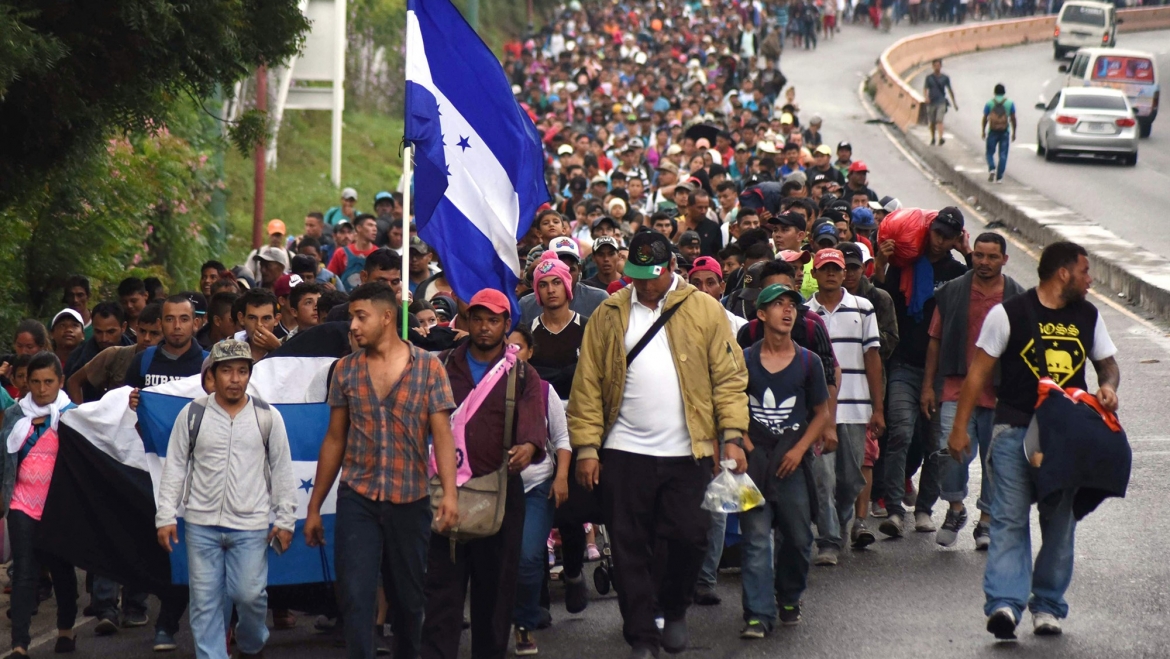 A caravan of as many as 4,000 Hondurans has left their homeland, traversed Guatemala and entered Mexico where they are being admitted on humanitarian grounds. There are hundreds of other Hondurans who are currently moving through El Salvador in hopes of joining the bigger group.

People in the caravan explain that violence and insecurity in Honduras make it impossible for them to remain there. Some say they are fleeing gangs that terrorize their neighborhoods and are seeking sanctuary in Mexico or the U.S. Others are in search of jobs so that they will have income and more stability for their families. It seems that the U.S. is the planned-for ultimate destination as most are hoping for asylum here.

“….The assault on our country at our Southern Border, including the Criminal elements and DRUGS pouring in, is far more important to me, as President, than Trade or the USMCA. Hopefully Mexico will stop this onslaught at their Northern Border. All Democrats fault for weak laws!

….In addition to stopping all payments to these countries, which seem to have almost no control over their population, I must, in the strongest of terms, ask Mexico to stop this onslaught – and if unable to do so I will call up the U.S. Military and CLOSE OUR SOUTHERN BORDER!

…I am watching the Democrat Party led (because they want Open Borders and existing weak laws) assault on our country by Guatemala, Honduras and El Salvador, whose leaders are doing little to stop this large flow of people, INCLUDING MANY CRIMINALS, from entering Mexico to U.S…..”

Frankly, I am tired of hearing what Trump has to say. I think we’d do better to focus on what our faith — or even our Lord — has to say to us. After all, as Christians, isn’t our identity in Christ supposed to trump all of the lesser claims like nationality or political position or geography.

I don’t know how often we think of it this way, but when politics contradicts our beliefs, we need the latter to deliver a critique of the former. Essentially, that’s the definition of the church’s prophetic role in the world. Remember that line from the Bible about not conforming to the world, but being transformed by the Spirit? Dr. King put it this way: “The church must be reminded that it is not the master or the servant of the state, but rather the conscience of the state.” It is our job as the church — as Christians — to speak the truth in love, to set free, to identify captivities and to call out political idolatries.

Does Jesus say anything about a caravan of 4000 folks fleeing social and economic conditions in their country with an eye to crossing the southern border of our country? Actually, if we have ears to hear, the Bible has much to say on such real-life situations.

It’s actually the most basic claim of all Jesus’ promises about the Kingdom of Heaven. The Aramaic word he used that we translate Kingdom, it’s the same word that was used in reference to the Roman Empire. That means, every time Jesus spoke about the Kingdom of God / Heaven, he was effectively replacing all the Roman Empire’s claims on people with the assertion that they were ultimately and always God’s people, so only God had any real claim on them. Despite Caesar’s claims to divinity, Jesus said in no uncertain terms, Caesar is not God!

What then is our faith saying about a caravan of exhausted, desperate people traveling — mostly on foot — between 4 countries and over 2200 miles? Actually a whole lot, if one has ears to hear.

We believe as Christians that how we treat the most vulnerable is how we treat Jesus. If you doubt it, check out Matthew 25:31:46. How are we going then to respond to this human tide of the hungry, the thirsty, the naked, the stranger, those sick and those who are imprisoned? Jesus warns us, “Truly I say to you, just as you did it to one of least of these who are members of my family, you did it to me.”

God calls us to protect and seek justice for those who are poor and vulnerable. We are to welcome and respect the stranger and the sojourner in our midst. God  judges us over our treatment of the oppressed, the immigrant, the outsider. How we receive the people in this caravan might well be a test or a sign of how we relate to God, who is the ultimate marginal One.

Trump is going to say whatever he wants. There seems to be no way to stop him. But God is still speaking too. Are we listening? Our God has suggested that our treatment of migrants and refugees is a measure of our faith. That it is wrong to turn living, breathing human beings — images of no less than God — into cultural and political targets, or victims of our neglect, arrogance and prejudice. If we but have faith the size of a mustard seed, we can move mountains…

Who do you want to listen to? Who are you going to follow?