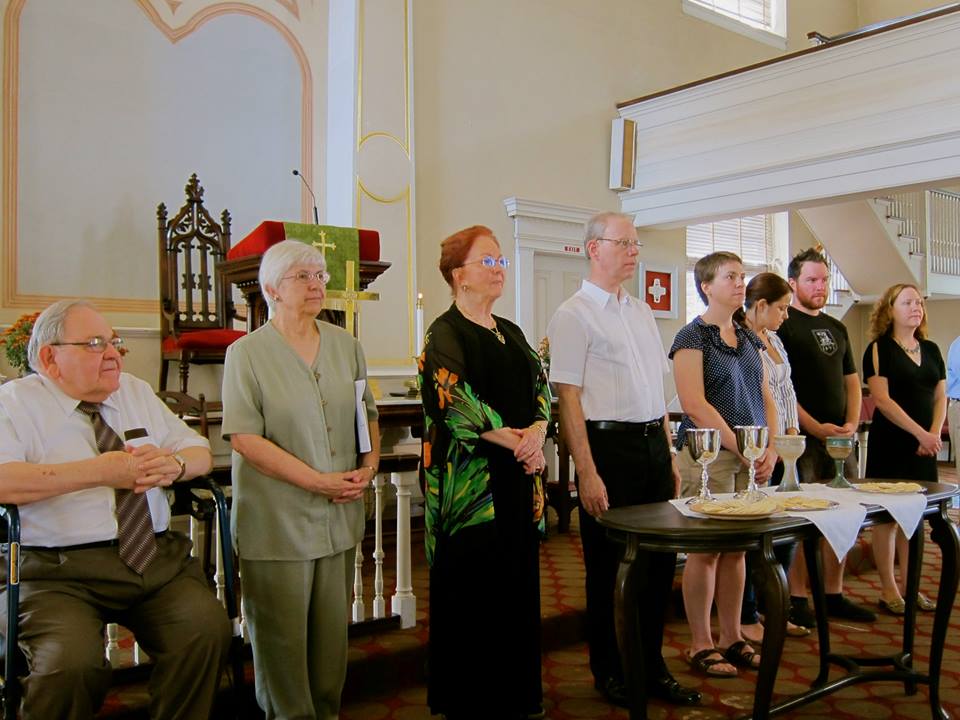 I feel a bit disconnected. It started with the sabbatical — new people show up in 3 and 1/2 months, so when I got back, there were new folks who knew everyone (or at least some people), but I didn’t know them!

It got worse pretty quickly, when Teresa left. Woody and I have been holding down the fort, or the office. But stretched a little thinner, we haven’t gotten to every last task. And that has meant I haven’t been as good or as consistent about following up with visitors. I feel bad about that. First of all, it means that one aspect of Old First’s welcome — a personal note from the pastor — has been missing from their experience of arriving.

But also, I have realized, it’s harder to identify, recognize and know the new people when I don’t have the extra chance of seeing their names and remembering them when I write them and then later getting the time sitting with them and getting to know them outside of Sunday morning.

But one of our newbies asked about membership and joining. Actually, it’s someone who has been around for some years, took a little hiatus, and then found that some of the challenges in her life seemed to call her back to church and the support she found here. Amen. And back for her second round, she was ready to join. Her desire to make the commitment acted as my motivation — it was time to look for who might be invited to join a new members’ class and ultimately to join the church.

So I had to start thinking of others who we should approach and invite. Before I got very far, I realized that Samantha and Chris took the class last time, but could be here when we received the class into membership. So they are already ready to be received this time.

But as I scanned the congregation in my mind, and as I checked out our records, I became increasingly aware that there are again a host of new folks who seem to have found their way into us and who are now regulars. Fine as they are participating as they are, we do encourage the commitment that reception implies. I do think there is something upbuilding about saying come hell or high water, you are going to hang in and stick it out with us. Sort of “for better or worse” but at church.  We’re not perfect, but we’re worth the struggle!

Also, with a series of congregational meetings and important decisions coming up, maybe some of these new folks who have already found their way into this community… maybe they want to have a say in what we decide, especially on big questions facing this church that could effect our future dramatically?

Anyway, I was surprised when I really started to realize how many people there are to be invited to join these days. It also occurs to me that it’s not just my responsibility to get to know and welcome them. Instead, it’s our duty as a congregation…

Adam used to try to be sure he always knew the new people before they formally joined. He actually liked it whenever I mentioned someone, he’d already know who I was talking about. Even better, he’d already know them personally. He admits he hasn’t kept up his record (he was quite good at one point almost knowing everyone new I ever mentioned!), but he still likes it when he know the newbies.

I wonder how different it would be for people showing up for the first time or trying to find their way into our community if all of us who are already planted here were actively trying to reach out and meet and include in the newer ones? It’s not just my job; it’s our job. And think how much easier it would be for them to find their place among us if all of us were trying actively to welcome and get to know them?

Here’s a list of people I sent invitations to the class and membership to. They may not be ready to join yet, but hopefully, they know they are wanted and welcome. (And also welcome to continue to participate in this community just as they are for as long as they want — whether or not they ever join). Maybe you could make it your job to make sure you identify them and get to know them and do what you can to ease their arrival and rootning among us? (Likewise, I wonder if the newbies all know each other, or even know that others are also recent arrivals?

Pray for these folks. And then go out of your way to meet them. They are good folks; Old First continues to be blessed by the caliber of people God keeps sending us! But do you know that truth in the particularity of these people: Allison, Caryn and Damon, Chris and Samantha, Danny and Mollie, Dredeir, Emily, Jane, Joshua, Linda and Jason, Nathana, Ozella, Sue, Steve, Tony, Winston and Deanna?

Two of them already thought they were members. And it occurs to me, by the time we are actually “joining” people, really they are already a part of this community. But we still believe in asking people to announce their commitment; to make it before the church and before God. And there are always relationships to be deepened, even among those of us who have been around here for years. Thanks for your help with all that.