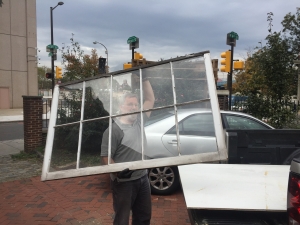 The congregation passed the budget for window restoration almost without a question, and unanimously at the congregational meeting last Sunday after worship.

The folks from the Fairmount Conservancy showed up on Thursday as scheduled to remove the first two windows, take them back to their workshop, and begin repairing and restoring them. They estimate that they should be able to complete two windows in about two weeks. When these first two are ready, they will be returned and reinstalled, and two more will be taken. They will keep up this process until all the windows needing to be removed for restoration are completed. They also have to scrape, reglaze and repaint the windows on the front of the buildking, but those will not need to be removed. 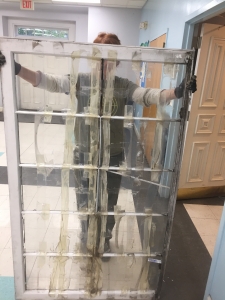 While windows are missing, they fill the openings with white painted plywood to protect the building interior from the elements and pidgeons.

Thank you for pledging through the Capital Campaign and for fulfilling your pledges. We have already accomplished a lot more than you can see — with the new, energy efficient boiler downstairs and all new mechanics for the elevator. But as we roll into the window restoration, you will be able to see — week to week — progress on the building and the fruits of your generosity, as the windows are carefully and sequentially restored. 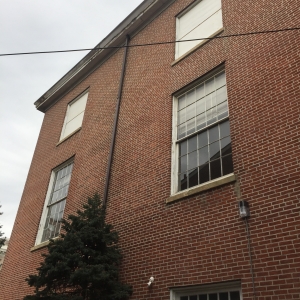