Words of Appreciation for the Career (so far) of Bob Robinson 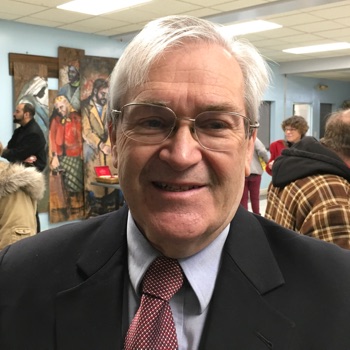 (There was a celebration of Bob Robinson’s (our summer interim minister while Michael is on sabbatical) retirement as the Anna Burkhalter Professor of Old Testament and Hebrew from the Lutheran Theological Seminary of Philadelphia. The celebration was held at the Valley Green Inn on Thursday night. Geneva offered the opening prayer. And Bob’s close friend and colleague, the Rev. VJ Kumar, told stories of their time together. Michael offered these words.)

I  am Bob’s pastor at Old First. (That also makes me Geneva’s successor.) And being here with you all tonight to celebrate Bob’s ministry is just one of many honors in my life!

There is something humbling for a pastor in having other religious professionals in the pews. The heads of ecumenical organizations, the pastoral counselors, the retired Big Steeple pastors. And the seminary professors.

As I begin tonight, then, I am pleased and thankful to report that Bob is a gentle and compassionate colleague. When the preacher forgets something about the prophet Elijah or misrepresents some part of Moses’ path, the Hebrew Scripture professor says to me quietly, aside, after service, “You know that…” Well, I know after I have been reminded!

Bob is as gentle as he is firm. And it seems that one needs a Scripture passage for a Hebrew Bible professor’s retirement. So I’ve been paging through the Bible. And trying to think of a passage that stands in its own right, but also connects somehow with Bob and his work.

And I settled on that passage from the 5th chapter of Job. It’s a Psalm really that takes up the middle of the chapter. A song to the great things that God does. And it ends with this lovely promise:

“So the poor have hope, and injustice shuts its mouth.”

So the poor have hope, and injustice shuts its mouth. Amen.

A promise for these difficult days we seem to be going through.

And a reminder, at least for me, of Bob’s witness and ministry.

I commend to you the whole passage. Job 5: 8 — 16. It seems the least I can do as a speaker tonight, in honor of Bob’s work and career.

But I have decided, instead of leaving it with Scripture, to offer a prayer. A prayer before Scripture. For it’s in praying and asking God, it’s in letting the Spirit enliven the words on the page that Bob’s ministry has found its deepest meanings and rewards.

The prayer comes from a friend and UCC colleague of mine, the Rev. Maren Tirabassi. It’s titled “Prayer before Scripture in an Ordination Service.” Ok, Bob’s ordination was a lifetime ago. But his ministry is still very present and continuing. So let us listen as Maren leads us in prayer:

“Open our hearts to this text, O God.

For it is older than sermons.

Shorter than anthems and charges.

And deeper than the wisdom of churches and denominations.

It questions everyone of us.

It lays hands on all of us.

It is the gift taken from this party-day

Into the joys and the sorrows

Of the years to come.

Help us take our places,

In the communion of saints,

Because the Bible told us so.

Maren’s prayer reminds me of Bob’s ministry: his teaching and scholarship, but also his service and love.

Think of all the pastors that Bob has helped to prepare by opening them to the sacredness of Scripture. Two of his students in as many days, when I said I was coming here tonight, have remembered to me his continuing influence upon them in their ministries.

But more than that, I want to speak about how Scripture has affected, formed, sent Bob. I believe that Bob’s ministry and his heart have been opened by the sacred texts he treasures, studies and shares.

There are perhaps different kinds of Christians. And Bob is one of those Scripture Christians. Not in any legalistic sense, but of the Spirit. The Bible had opened him to God and God’s people. Amen.

I see this on Saturday mornings at Old First when he works the floor at our hot breakfast and clothing cupboard. The crowd is urban poor folk. Sometimes a bit rough. Always a little complicated. And, nonetheless, beloved of and sacred to God. Bob knows, sees, and acts that out.

And you can see it in the way that he is present to the people we serve.

And in the ways that they relate to him.

Make room for him.

Accept both his support and his challenge.

I see the same thing on Sunday mornings, particularly during Advent and Lent, when we at Old First get the blessing of Bob’s leading Bible study and a very devoted following wouldn’t miss it for the world.

He’s really just one more member in our church, in a wonderful, democratic way. And he’s a leader at Old First. And a member of the choir. And many Sundays, Lutheran and Episcopal congregations get him to come lead their Bible studies so that he has to run in and join choir at Old First just as the service begins.

But when he leads our people through the ancient, sacred words… And guides them to reflecting on their days, and where God is in our presents, our blessings and our challenges…

How this man is present to that Scriptural witness. And to the witness of those who gather with him to find comfort and challenge, to find God  for the living of our days.

Sunday is a very different group than Saturday. If the latter is the urban poor; you might describe Sunday, more often than we want to admit, the over-educated and privileged. Still he is present to them. Because he knows and shows that everyone is precious in God’s sight.

And our Sunday Bible studiers welcome him.

To his support and challenge.

Bob has this depth and steadiness that’s more than his own. Of course, it’s from God, but it is mediated, paginated, imprinted in a faith he so naturally exudes and shares.

I trust Bob Robinson, and his faith and the ministry that comes of it. We’ve heard about sabbaticals here tonight. And I’m leaving for one on Monday night. And I am entrusting the care of our people, our Saturday and our Sunday people, all God’s people, trusting the leadership of that precious congregation to his commendable service.

My only other sabbatical was when I was on NY Conference staff. And it was easier leaving that ministry for a time. This is harder. Walking from the intimacies of pastor and people. But I can’t imagine being able to walk away with any greater confidence than handing off my responsibilities to Bob.

And he is downright giddy. The man who went to seminary all those years ago thinking he was going to be a pastor. And got a bit sidetracked into the Ph.D. and a career as a seminary professor preparing pastors for ministry. I just hope he’s as excited about this next step in his career when I get back in September!

It’s that same, well-earned trust that we are here celebrating and giving God thanks for. For Bob’s faith, journey, witness and service.

So the poor have hope and injustice shuts its mouth. Amen.
Michael